This was one pudding that I used to make frequently years back . Later as I got more interested in layered ( or complicated, as my friends would say 🙂 ) , this pudding recipe remained forgotten among the recipe books.  After a long time , made this pudding again last month, when elder son’s friends had come over .  Kids loved it and the pudding disappeared real fast.

This is a fairly easy pudding with few ingredients  – milk, cocoa powder, condensed milk, whipping cream and gelatine. The step by step procedure is given below.

Add 4 tbsp cocoa powder to 1 cup of warm milk in a bowl . Stir well. Double boil this cocoa mixture ( To double boil – Heat a pan filled with water and place the bowl over the pan without touching the water ). Stir till the mixture gets thicker.

Remove the bowl when the mixture is thickened. Add 1 cup milk and 1 tin condensed milk.

Add gelatin to the cocoa mixture. Fold in the whipped cream .  Keep the pudding in the freezer for 3/4 hr and then keep in the fridge for 3-4 hrs.

Back to blogging after a long break… Hubby’s parents and sister n family were with us for 2 months vacation. Was really engrossed with the cooking, outings , shoppings 😉 Kids were all excited to have cousins over ..

One day my father in law showed me an article that came in the newspaper . The author was mentioning how hectic it was with her family visiting them for vacation and how she will miss them when they go back , but at the same time she was longing to get back to her usual routine and writing . My father in law was pulling my leg asking if that was how I too feel , the only difference would be that I am not into writing 😉 I replied laughing , I will get back to my blog later.. 🙂  But now house does feel a little empty without them here… 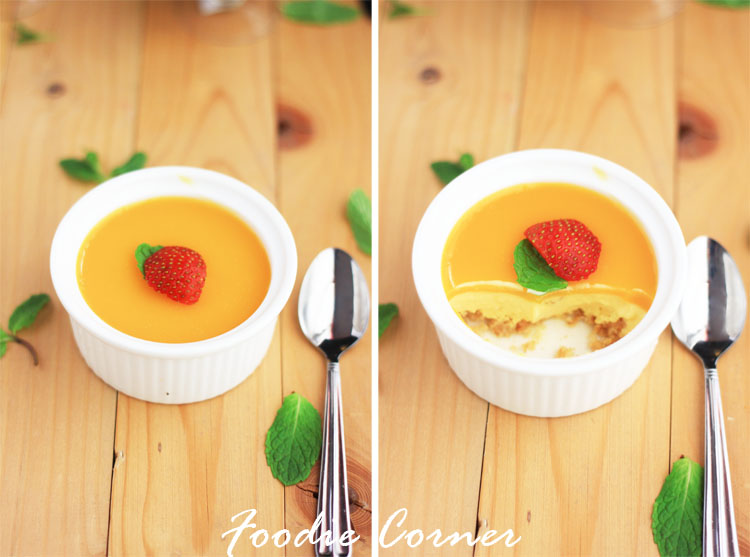 After the No Bake Dates Cheesecake here is yet another no bake cheesecake for you. Since it is mango season what better option other than mangoes?  And this recipe is for all my friends who have been asking for easy , not complicated recipes.. 🙂  This recipe takes only about 15 minutes to prepare.. (apart from the freezing time) And you have a rich delicious cheesecake that will make others go for a second serving .. . I had made this no bake mango cheesecake when in laws were here.. And it was well appreciated. Preparing the cheesecake in individual glasses is a great idea as they give a visual appeal too.. or you could use a loose bottomed spring form pan. 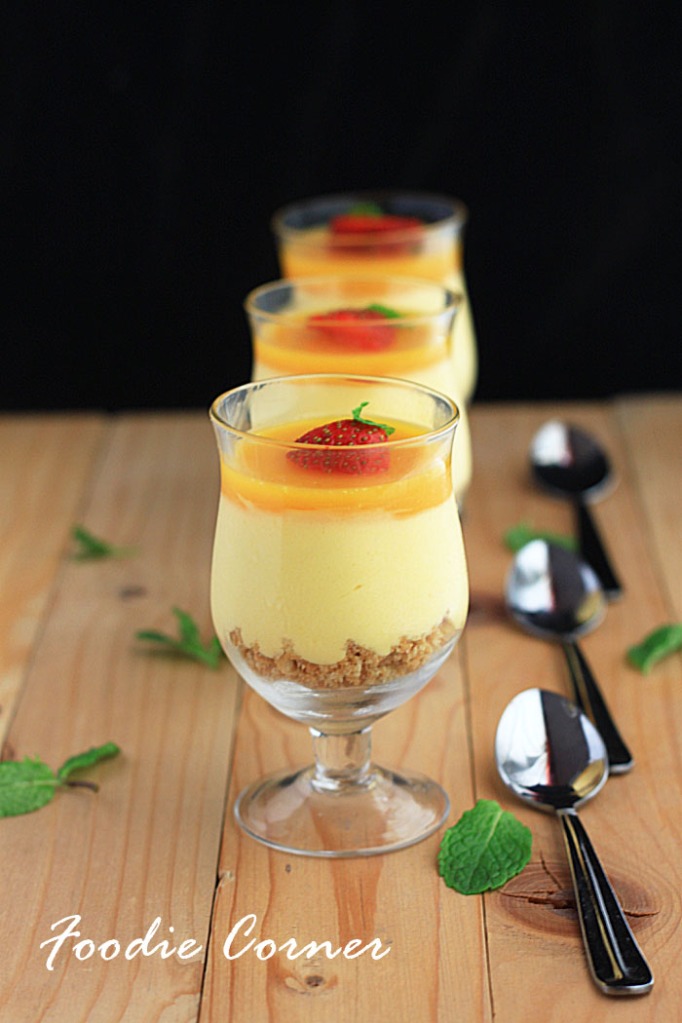 I found this recipe from the beautiful blog Maria’s Menu. I have been following her blog for a long time now, even before my blogging days. Do try out this recipe. .. 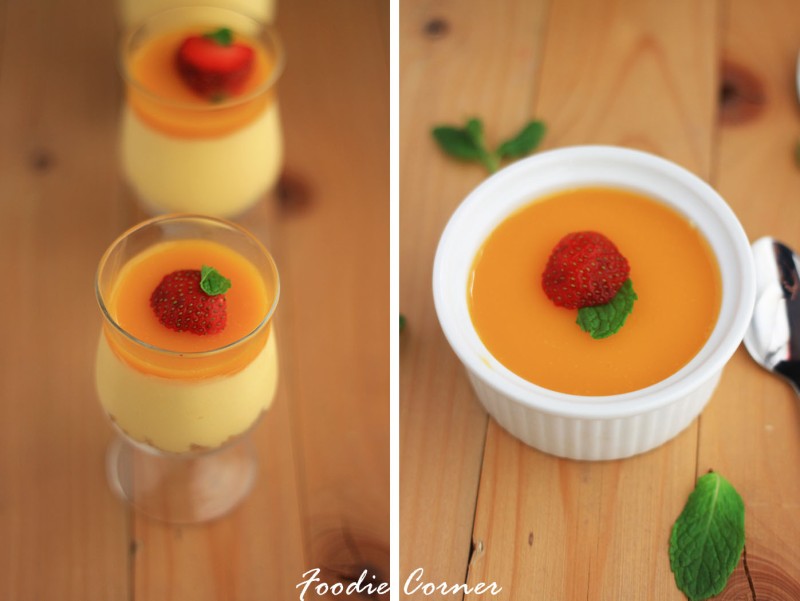 FOR THE BISCUIT LAYER

FOR THE CHEESECAKE LAYER

FOR THE GLAZE TOPPING

FOR THE BISCUIT LAYER

FOR THE CHEESECAKE LAYER

FOR THE GLAZE TOPPING 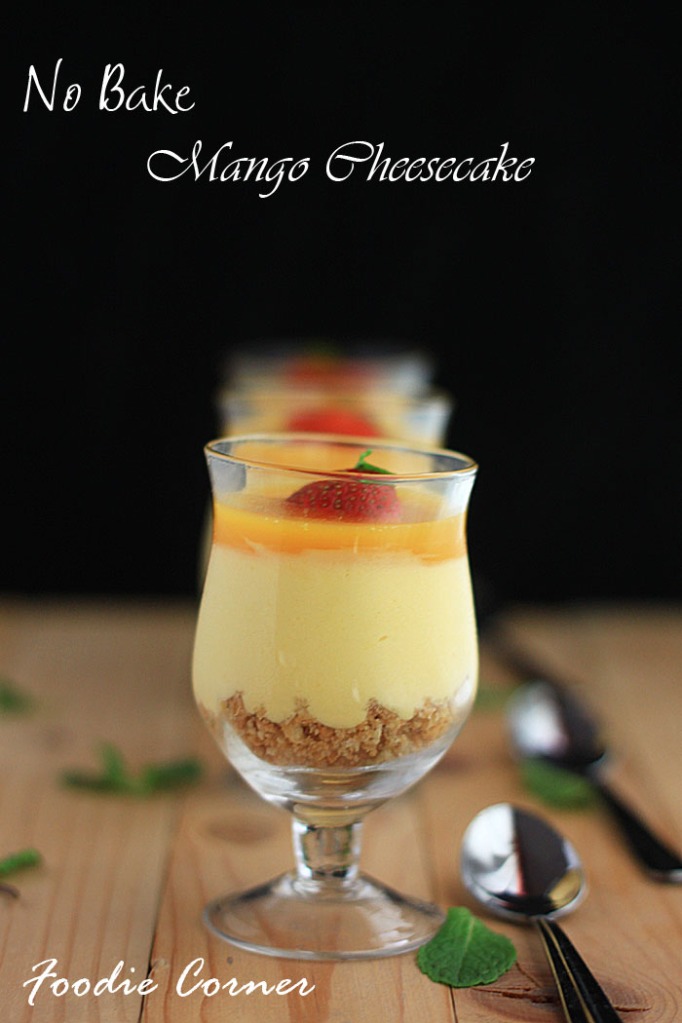 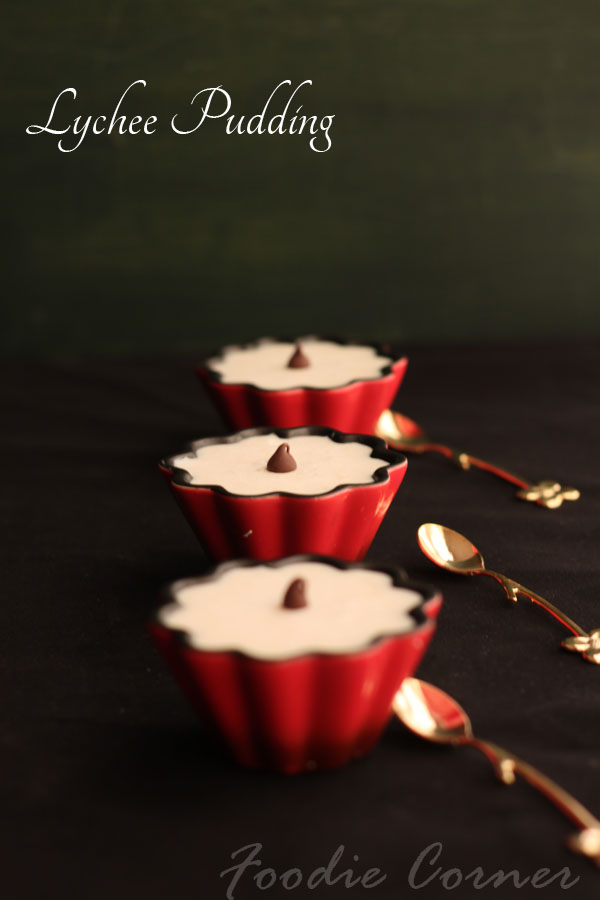 Few weeks back my niece asked me for few pudding recipes  for her school project . But there was a clause.. they couldn’t use the stove or oven  in the classroom – which meant , pudding recipe without cooking or baking..  and the pudding should be whipped up  by  20 min maximum . That was something I never thought of, whip up really easy puddings.. So thought, why not post some really easy puddings on the blog too?? 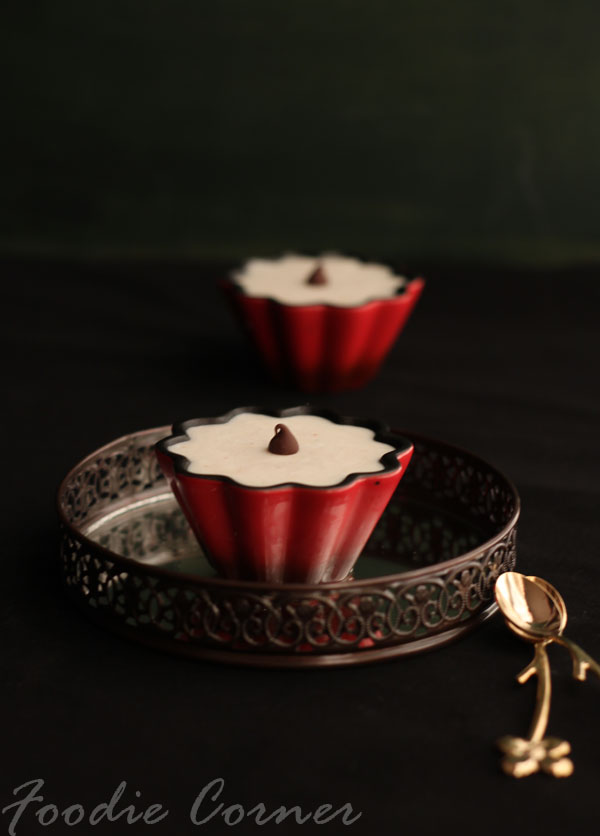 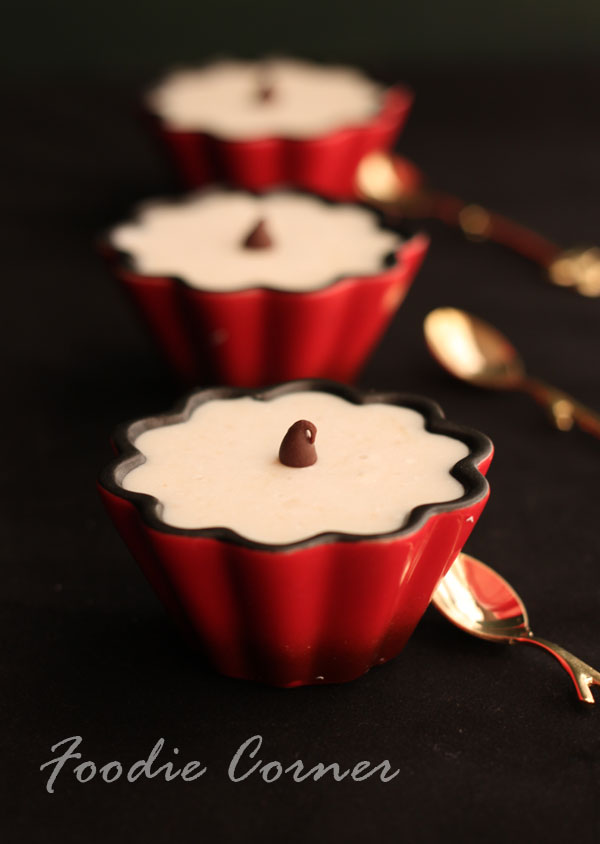 Often I get feedback from friends and my readers that they tried out a recipe from the blog and it turned out good , which makes my day !! 🙂  From the feedback I get the Dulce de Leche Pudding recipe is the one that I got the most applauds for ..

Dulce de leche is the name for cooked condensed milk .. Cook the condensed milk in a pressure cooker with the weight on for 45 minutes and you get a thick toffee mixture which is Dulce de leche..  After my first attempt in using the dulce de leche as it is for the pudding, I found it too sweet.. To reduce the sweetness I have added milk and used conrflour to thicken the mixture..

You can cook the condensed milk (which is dulce de leche ) and refrigerate for future use.. That way you can whip up this pudding within 10-15 minutes… 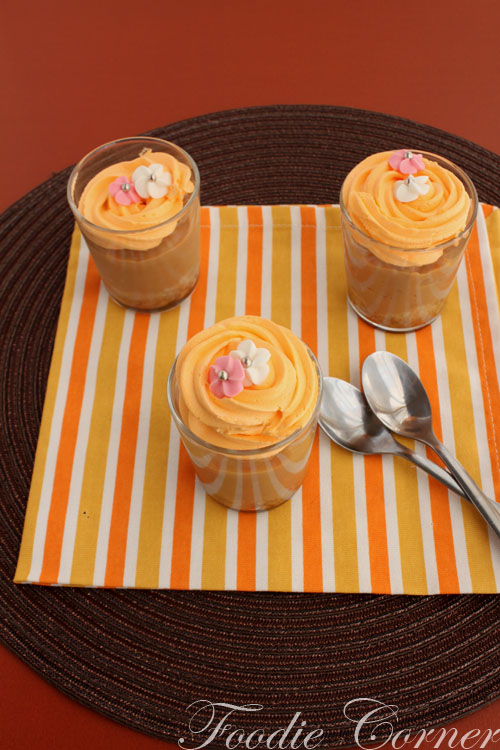 I felt that my previous snaps were not doing justice to this silky delicious pudding..So revamping the Dulce de Leche pudding !! All those who haven’t tried this , go ahead and try this yummy treat !!

I had been thinking of adding recipe cards for sometime now.. Here’s my first attempt at it.. Do you like the design? 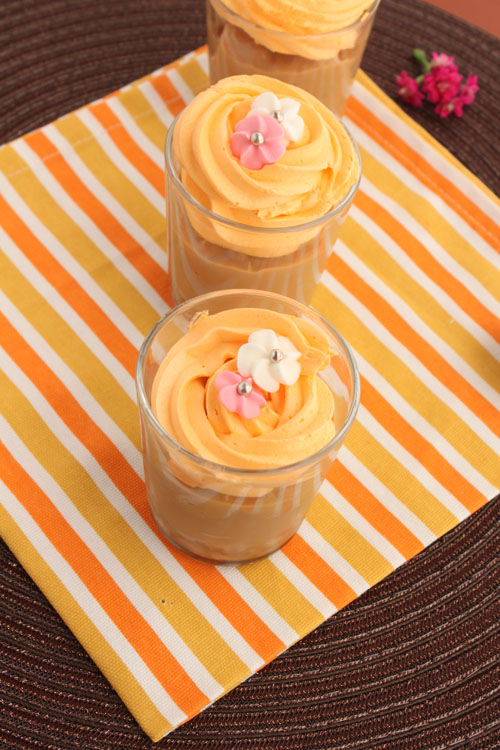 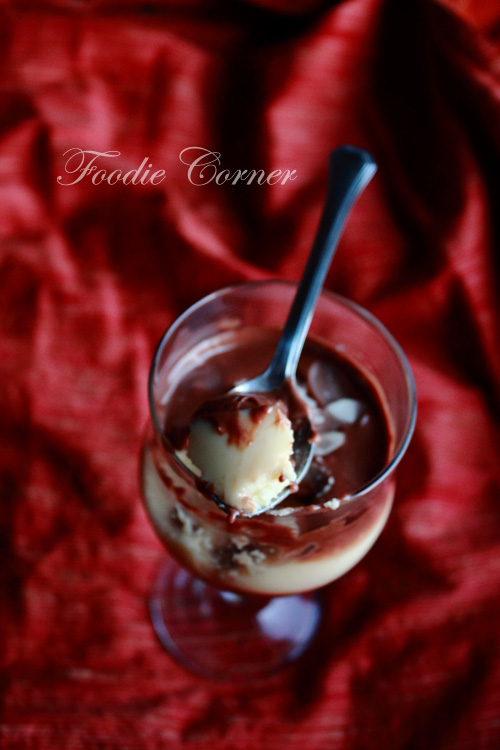 My son was asking the last day, ‘ Have you stopped blogging?’  I replied ‘ No…  why?’ His answer was ‘ Well , you are not making any new dishes these days’  Yes.. I am back after a  long hiatus.. and the reason –  a nagging back pain, which turned worse..  a rush to the hospital followed by treatment and bed rest .Now slowly getting back to the normal routine – which includes cooking and blogging.. 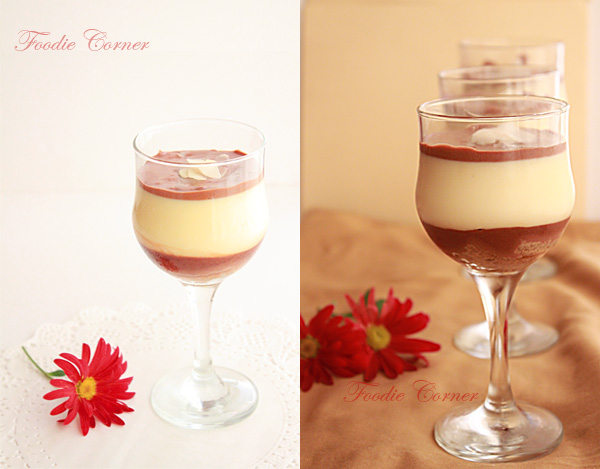 One good thing that came out of my ill health was the bed rest.. though initially  bit depressed as I couldn’t move round, the treatment period gave me  sort of ‘chill out time’ .. a break from the daily routine.. after a few days, I was enjoying it – the rain, the greenery and the long conversations with my little sister… Infact  my friends and cousins were bit envious seeing my long rest period.. 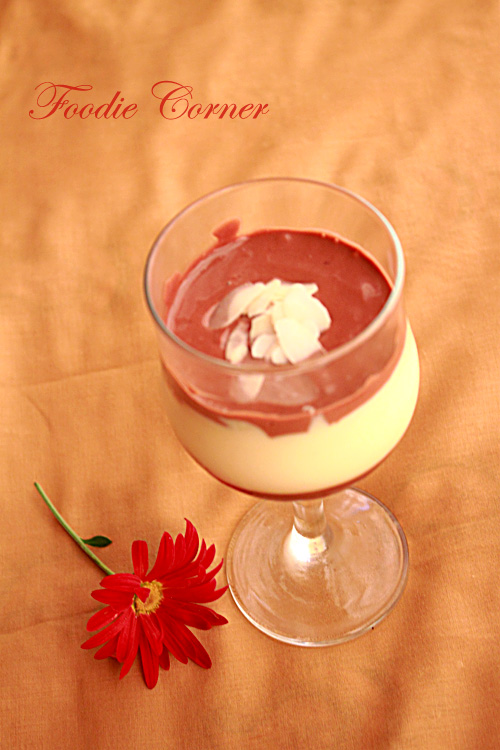 And this post is for all my loving friends and family who rushed in to help and offer support when I was in distress due to the back pain .. and to my dear hubby who had to take over the household duties and look after me too..

Thanks to all my fb page fans.. We have crossed 200 likes !!! Do keep supporting me..  Your positive feedback instills a sense of pride in me..  🙂 and  gives me the motivation to keep going.. To celebrate let’s have something sweet.. this recipe was given to me by my friend Roshan who knows about my love for puddings..  🙂 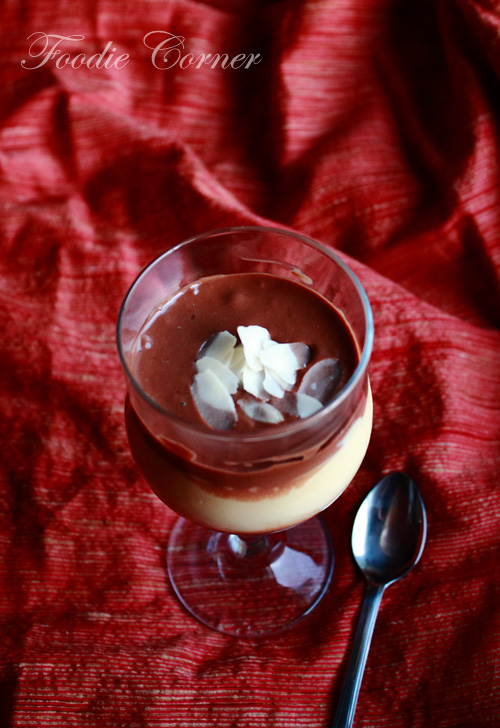 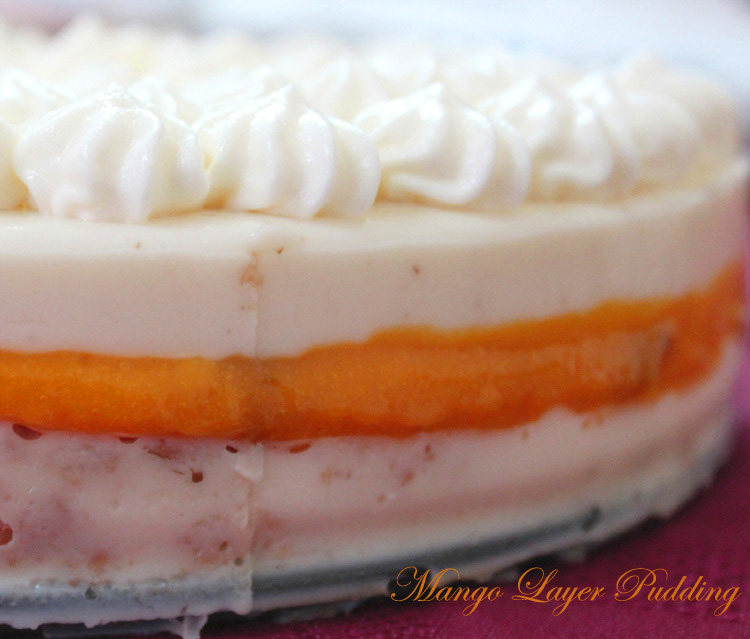 I love puddings… and I love to cook them too… Actually I am always on the look out for new pudding recipes, it’s kind of my weakness 🙂 …During one vacation in Kerala , while I was searching recipe books for pudding recipes , Zareena (my sister in law) said that she has got  a new recipe from her friend – it is a five layer pudding.. Five layers? Now I got really excited. So  Zareena and I got to work and made the pudding, both of us really eager to see how the layers would turn out. While we were whipping it out, my brothers would peep in asking “Is it ready now?” … And finally the pudding was in the fridge. Now my brothers got really impatient, asking every now and then “Why is it taking so long?”  The result – we had to take the pudding out before it was fully set.  We never got to see the layers 🙂  Back in Abu Dhabi , I tried the pudding again and called up Zareena to say that this time I did see the five layers 🙂 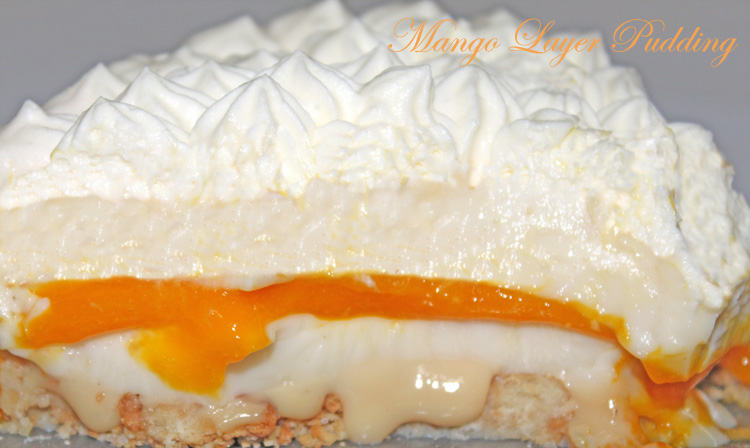 I  made this pudding recently at a get together and it got awesome responses.. So check out the recipe and try it out.. 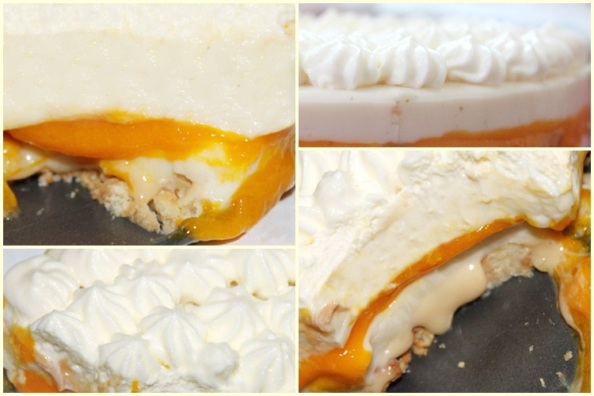 For the first layer (Biscuit Layer)

For the second layer (Butterscotch Layer)

For the fourth layer (Mango Layer)

For the first layer (Biscuit Layer)

For the second layer (Butterscotch Layer)

For the fourth layer (Mango Layer)

That’s it.. You can top the pudding with whipping cream or pralines.(That will make it a six layer pudding 🙂 ) 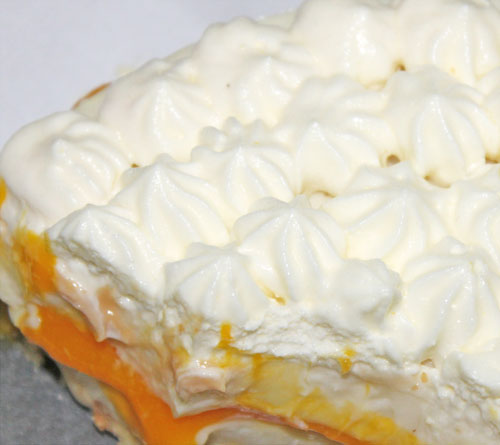 and to Kerala Kitchen hosted by Magpie’s Recipes 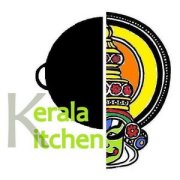 Hubby’s aunt (Elemma, as we call her) is a wonderful cook.. Everytime we visit her, I would be curious to see her new dessert preparation… 🙂 ..Once we had a new pudding and I asked her what the ingredient was. She said ‘Condensed milk cooked in pressure cooker’. At first I thought she was pulling my leg, but later found out it was true!!! And I used to call it ‘puzhungiya condensed milk pudding’ 🙂 (steamed condensed milk ) ..  After I started blogging, found out there was a technical name for it – Dulce De Leche (hmmm.. sounds more stylish … :))..

The first time I tried the pudding it was way too sweet.. And I hadn’t tried to make it again for a long time.. Recently I thought to try it again by cutting down the sweetness and this time it was a success.. Had made this one during our friends’ visit and yes, it was a hit. My friend Azna, who is an expert cook, has given me the green signal to mention in the blog that she loved the pudding 🙂

So here goes my version of dulce de leche pudding… 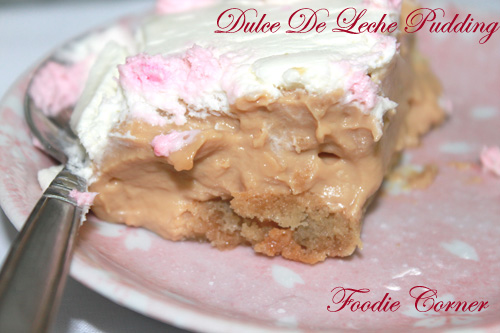 As summer is nearing, its time for cold puddings 🙂 … This is an easy and simple pudding, actually one of my first attempts which was successful . The plus factor is that preparation time is less than  fifteen minutes..All you need is bread slices,milk, cream, condensed milk and pistachios or nuts of your choice.  This pudding is made in 3 layers and you have to use a rectangular tray for arranging the bread slices. So here goes the recipe…

Note : If the milk mixture is remaining pour it on top of the bread slices and then spread the cream . 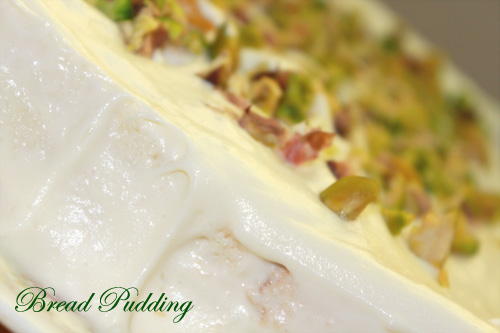 A packet of stale bread meant one thing – it’s time for bread pudding. 🙂  The recipes in my recipe book  was more of a caramel bread pudding , meaning more eggs and less bread. I browsed through the net and decided to try out this recipe with small changes. As my hubby and kids are not so fond of raisins I substituted them with almonds, and topped the bread with pralines just before baking.. The warm bread pudding with the almonds, cinnamon, pralines – a real treat for your taste buds!!! 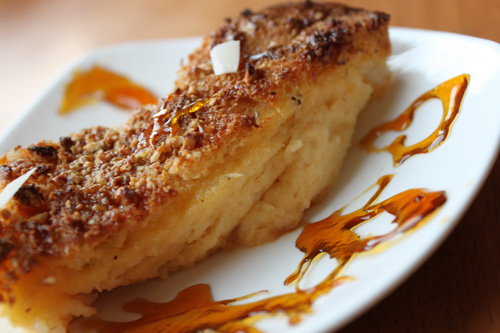 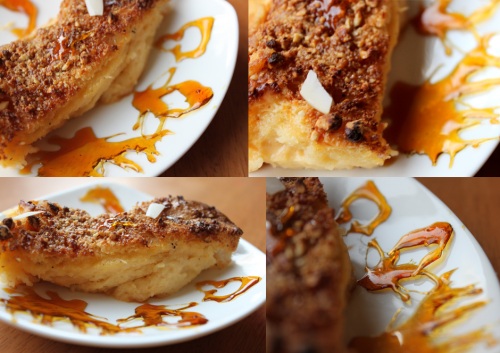 For the Praline powder

P.S: Sending this to Bake-off round up at Versatile Kitchen , A.W.E.D-British Event by Reva and DK , to Priya’s BEST WESTERN DESSERT EVENT , Only Cooking With Bread and Celebrate Sweets – Warm Desserts Event hosted by Priya and Nivedita. 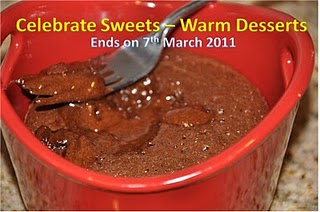 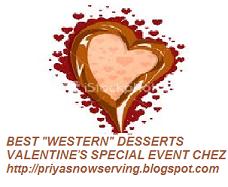 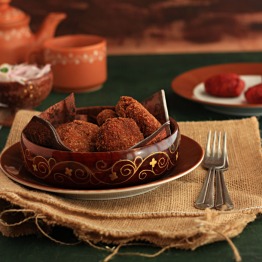 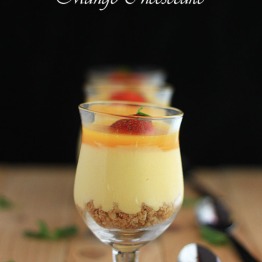 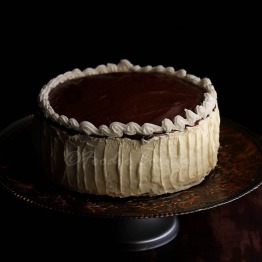 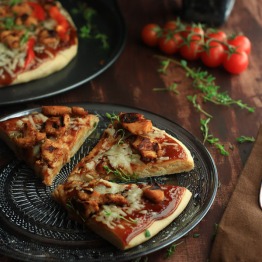 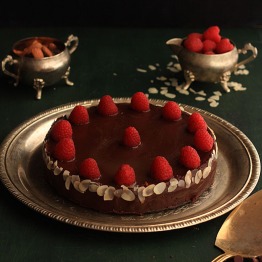